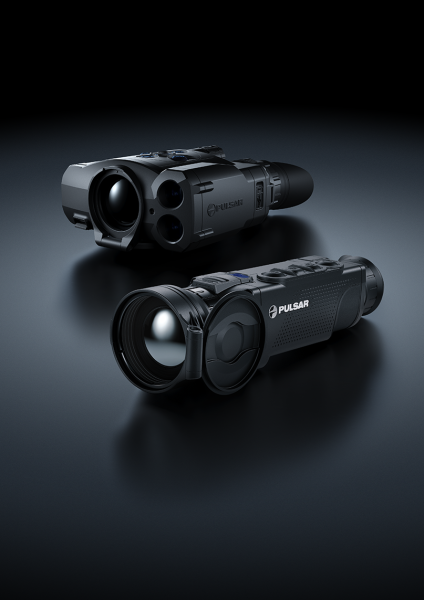 The review was kindly provided by RifleShooter Magazine

It wasn’t that long ago that we had to wait 18 months for a major hardware upgrade from Pulsar, but times have changed. It was only a few months ago that I was reviewing the Accolade 2 and Helion 2 spotters, and yet here we are with the all-new Pro series of both devices.

Pulsar had a clear choice, either discount or innovate. Well, they have definitely chosen the latter and are now basing their business model on the such pricing structure, where if you want the best, be prepared to pay for it. The question is, are the new flagship products in the Pulsar range really worth all that extra cash?

Before discussing the toe-curling, eye-popping and indeed jaw-dropping price tag of the Pulsars, let’s look at the basic elements that make Pulsar confident you will indeed take a hammer to your piggy bank for their take on the ultimate thermal.

With Pulsar, you get the best and toughest build quality, the best materials plus superior ergonomics and functionality, it’s that simple. In my opinion, you also get the best user interface, navigation, wifi connectivity and app, along with the most comprehensive image controls. Their short click, long click selection system have been many times copied.

In the field, gloved or otherwise, there’s no problem finding and manipulating the controls either day or night. Fingers fall intuitively on buttons and functions, and the whole experience is iPhone-esque in terms of ergonomics and design.

The base mag is 2.5x on both models, stretching out to a rather hopeful 20x. If I could change anything I would probably opt for 2x to 16x, but that’s a personal preference – I tend to shoot at fairly close-quarters on smaller woodland permissions with typical ranges between 50m to 200m. If I regularly shot over 200-acre fields, I’m sure the current base mag wouldn’t bother me.

Another point worth noting is the AMOLED display size of 640x480. This might seem a bit low-res in a world of ‘HD’ this and ‘4K’ that, but that’s all upscaling, basically blowing up the core 640 image from the sensor to fit a larger display. It actually does nothing for the image quality whatsoever, so don’t be put off.

Now we’re getting to the crunch. Does the image quality warrant all that cash? If you can afford/justify the investment then yes, definitely, all day long. The new Pulsar V2 Pros with the <25 mK NETD upgrade are frankly stunning.

Every time I fire up either of these devices I think, wow, that’s impressive. It doesn’t matter if it’s a thermal-friendly day or one of those wet drizzly, foggy mornings that just kill the contrast, they’re just a joy to use. In great conditions, they’re amazing; on poor days, they’re still impressive!

NETD figures have become the battleground for thermal marketing. <50 mK was the norm, then Pulsar upped the game with <40 mK with their recent V2 releases, and now Pulsar have knocked them back over the net with the <25 mk in the new V2 Pros.

I’m going out on a limb here, but I honestly can’t see a better image coming out of a 640 sensor than that which Pulsar have managed to coax out of these new Pro models. The only thing I can see that could push the technology further would be a new larger sensor size, 1280x960 maybe? I think that’s a very long way off and I haven’t heard a single industry rumour to make me think otherwise.

The higher dynamic range provided by a lower NETD figure really comes into its own in a flat thermal landscape. Those cold wet mornings, raining, foggy and damp days is where a lower NETD makes a difference.

Larger sensors are a huge benefit, as they have more pixels to play and can therefore resolve better, something which is further enhanced by a larger 50 mm lens. The <25 mK figure means extremely subtle differences in temperature are translated into the image much more precisely and that’s the primary advantage.

However, the <25 mK of these Pro models adds another dimension in more ways than one. The image itself feels much more three-dimensional in all conditions – there’s more depth, detail and contrast to the image across the board. They’re not simply functional, the image itself is a joy to look at with so much more detail now coming to the fore.

My final pat on the back goes to the Accolade LRFs. Most onboard laser rangefinders in the thermal market can’t hold a candle to a dedicated unit but the Accolade’s is the exception. It’s good for the claimed 1,000 m and more importantly it’s fast and reliable, pinging the target accurately consistantly at any range.

There’s nothing not to like about the new Pulsar Pros. The battery life is exceptional, the performance, image quality and features are unmatched. The only downside is the asking price. Buyers’ remorse isn’t going to be an issue, until the other half discovers how much you’ve spent! If you can afford one, I’m very envious!