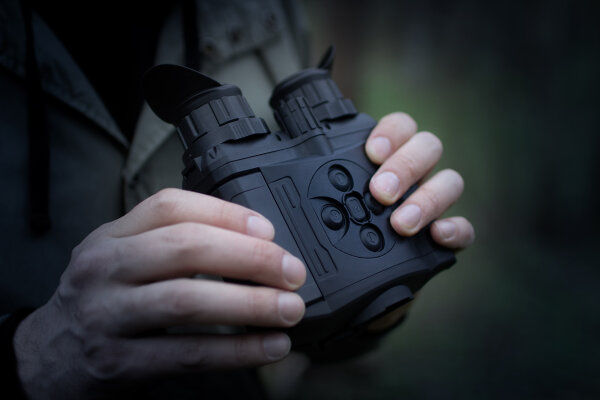 The review was kindly provided by the TFB (The Firearmblog.com)

Do you remember when mobile phones became common and new models with even better performance were released faster than you could apprehend? Thermal Imaging seems to be in a similar “zone” at the moment. A Golden era, which can be both good and challenging for the consumer. 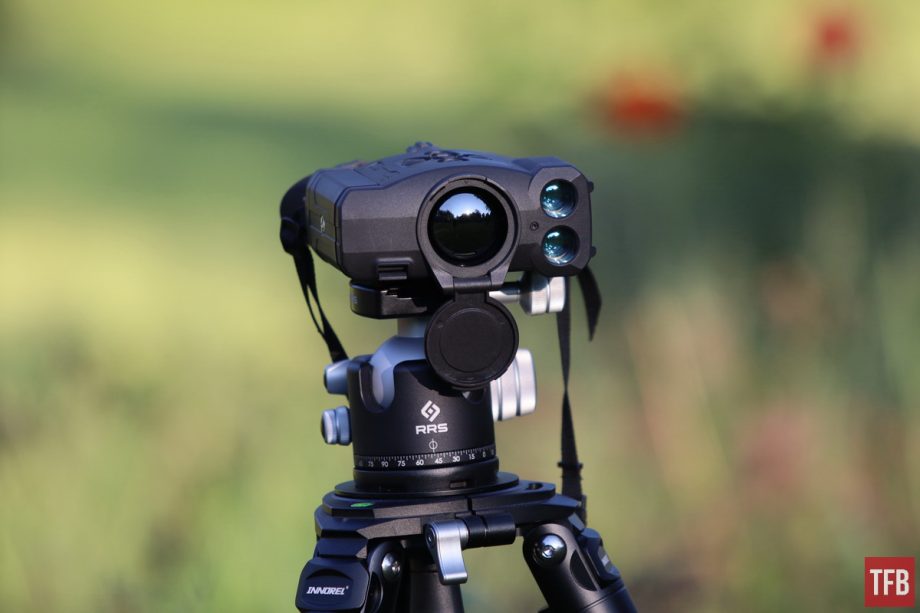 Up for review: Pulsar Accolade 2 LRF XP50 Thermal Binoculars. In fact, technically they are more bioculars, but the Accolade actually uses one sensor and two screens.

Good in the sense that there are always new, useful devices and features coming your way, often combined with a lower price. Challenging in the way that you may hold your purchase in anticipation of those new devices or features. Or you just wait, like me, in anticipation of those lower prices. And so it goes on, and you can only hope that you get on and off the thermal train at the right time.

I have been looking for some kind of night vision for years. My dilemma was that the gadgets I could afford were not good enough, and the systems I fell for were too expensive. I really wanted to buy something to get myself started in the night vision game, but the low-end systems just didn’t deliver. It was often a combination of low resolution and a low refresh rate.

The Pulsar Accolade 2 has given me some really nice moments with mother nature that I would not have been able to witness without this piece of technology. You don’t have to be a hunter to buy a pair of these, but it helps to have a similar hobby or use to justify the cost.

When it gets dark and your normal binoculars don’t work anymore, these will still show you everything that is going on. And there is really a lot going on in the forest and in the field as it gets dark! This device will spot anything from a small mouse to a fallow deer that moves without a sound through the forest. You will be able to spot animal behavior that you’ve never seen before.

TFB GOT One of the first units

I was lucky to get one of the first Pulsar Accolade 2 LRF XP50s in Europe to try out. To understand how it differs from the current (previous) version I was also given the Accolade LRF XP50 for side-to-side testing. There is now a free firmware upgrade for the old Accolade. Mine didn’t have it and I didn’t update it either, to keep the benchmark constant.

The Accolade does just fine, but the Accolade 2 is noticeably better. They both look the same from the outside, but if you give me a moment, I will be able to tell which is the old and new just by looking at the performance through the screen. The difference is not on the outside, the difference is on the inside and I think it was considerable.

Overall the size of the Accolades is smaller than (my) normal binoculars. Externally, the Accolades are made of polymer and rubber and seem very robust.

By the look of it, the Accolades seem to be capable of being submerged and still surviving. They are rated IPX7, which means they are rated for submersion to up to 1 meter for up to 30 minutes.

Below: If you use thermals a lot, you will certainly appreciate being able to use both eyes rather than a monocular or a thermal riflescope on a heavy rifle. They fit both young and old with some minor adjustments. 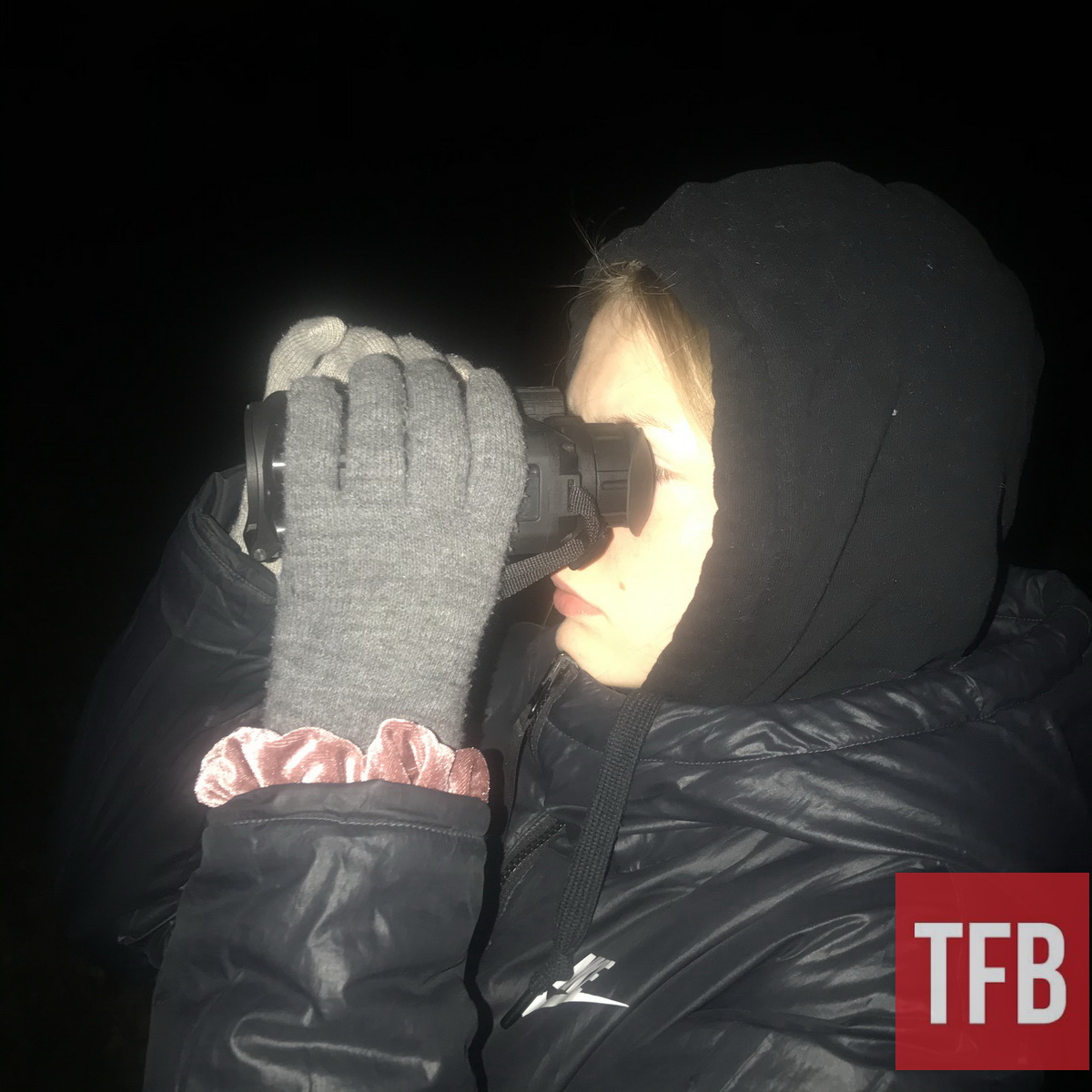 First of all, you have to understand what these thermal imaging devices do, what they register and what kind of information that they provide you. There is basically a sensor that registers differences in temperatures (thermal) of the objects that you are looking at and two screens that displays this information to your eyes. A few rows of code, software, provide you with the option on how you want this data displayed.

After a day’s cold rain, when everything has almost the same temperature, the new sensor will be able to pick up the slightest differences in temperature. When conditions are ideal, there will be less difference between the new and the old model. 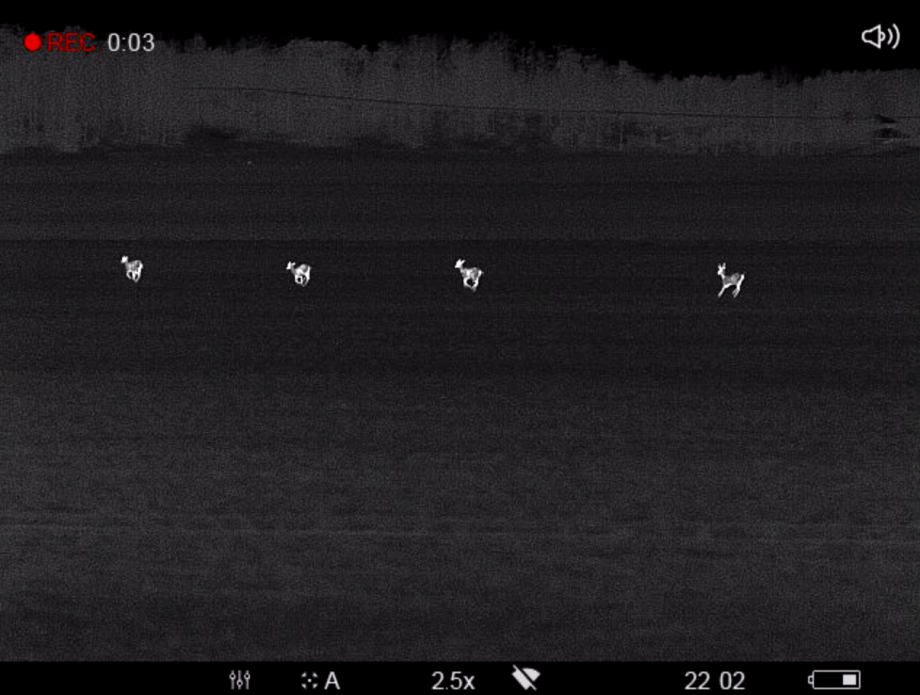 On a sunny, dry day you won’t notice the difference as clearly versus an older device. But when the going gets tough, the tough get going and this is where these new devices shine. I also did a quick benchmark versus the pocket Axion XM30S to prove this, it works well but has no comparison on a foggy evening. The new and upcoming Pulsar Axion XQ38 thermal spotter is more powerful than the XM30S, and may have a better chance.

Below: The straps are comfortable, and the Accolades are light to carry. 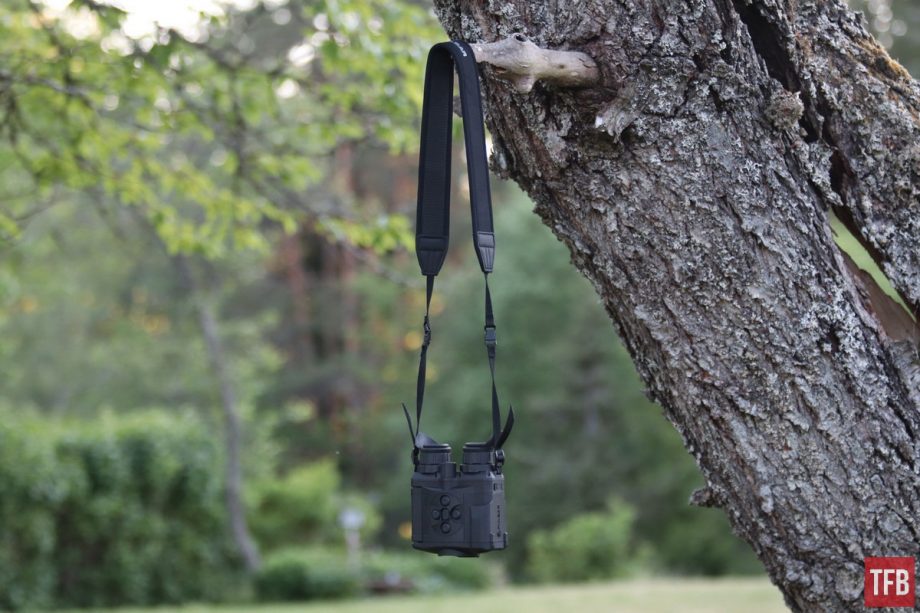 The magnification goes from 2.5 to 20 with a detection range of 1,800 meters. Most likely you will be using the lower end of the magnification most, it’s enough and the field of view is more important. 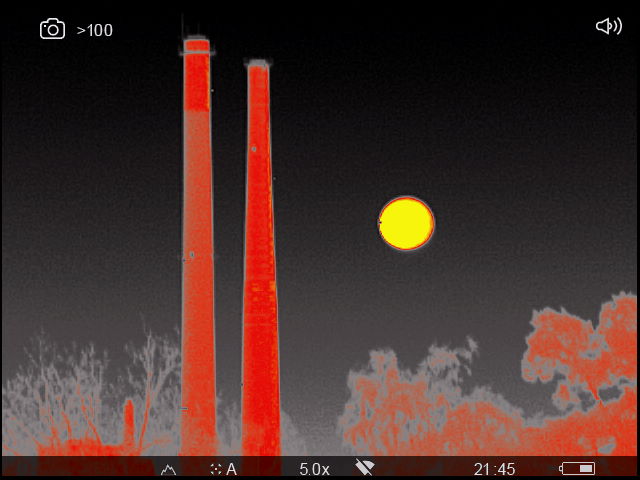 As you don’t really get a sense of depth in this like with normal binoculars, it’s great to be able to laser your target to understand how closer or far they are. The range is 1,000 meters, which is good enough for a thermal device. 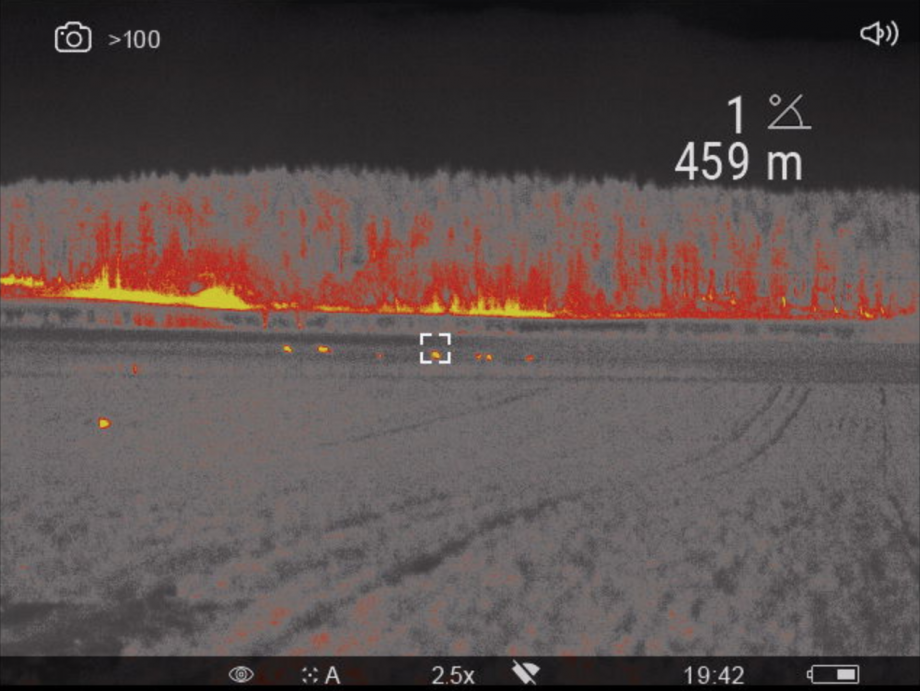 Yes, the LRF works in almost all cases. I had a few occasions where I had to laser a few times to get the distance, but it has more to do with the difficulty of holding the unit still without a support.

Here’s a story that needs sharing. I noticed a moose by the side of the road. I got the Accolade 2s out and started recording to get some material for this review. From about 40 meters I walked closer and closer. Things don’t look so dangerous when you’re looking through your binoculars, and sooner than I knew the rangefinder said 11 meters or 36 feet (probably something like 8 feet for a moose).

Unfortunately, I wasn’t recording as she got fed up and started chasing me, but I had other things in mind.

As I shared my story to some friends, I learned that a man was held in custody for a very long time, suspected to have murdered his wife. After some investigation and DNA sampling the Police found out that she had been killed by a moose, she had moose DNA all over.

With this story in mind, I hope you can appreciate these pictures and videos more and understand the length we at TFB are willing to go.

Below: 11 meters to a moose. Then she got fed up and I ran for cover… 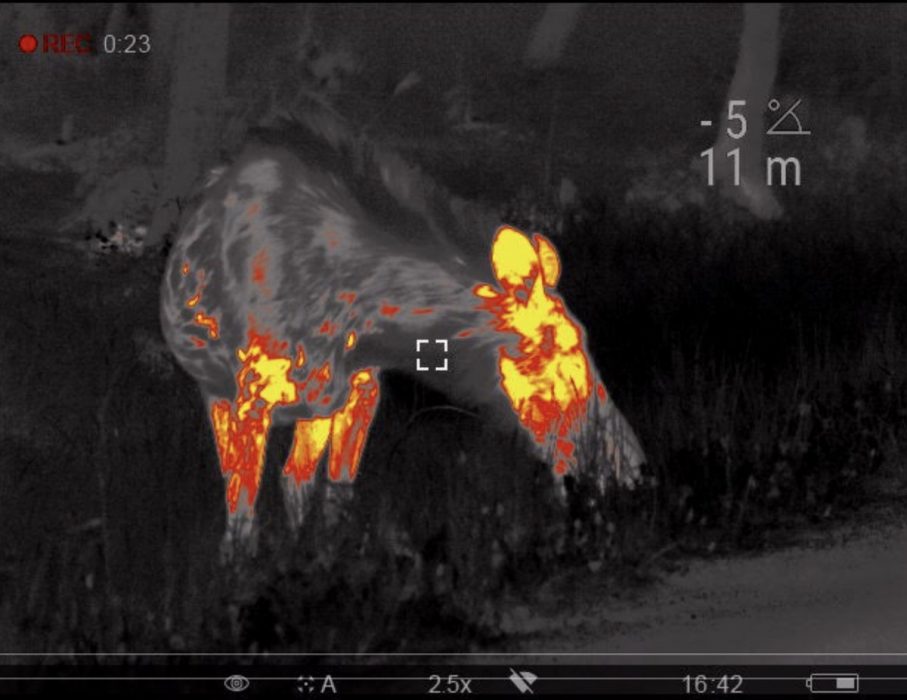 Below: Time to run, but her ears are still up. 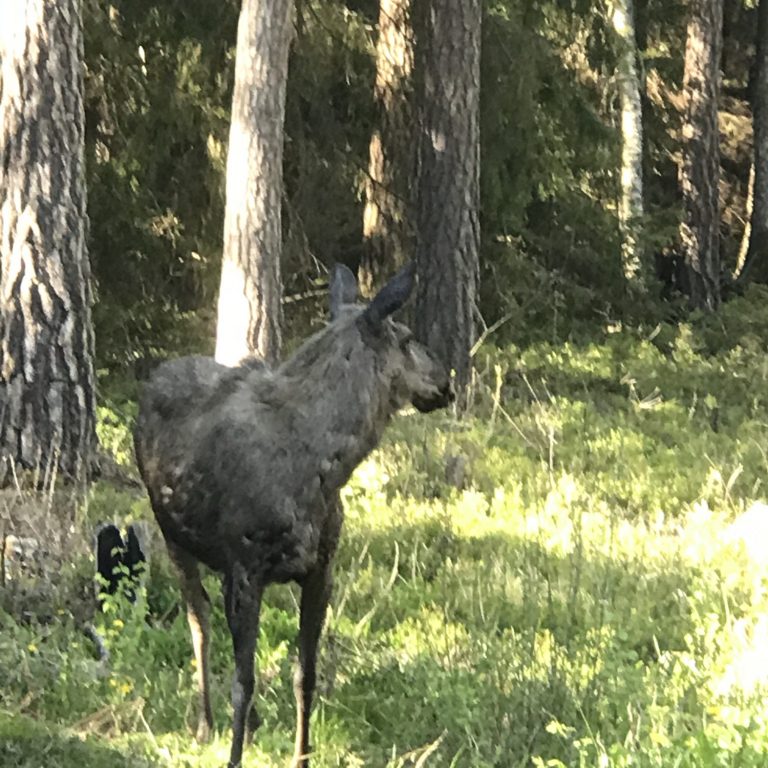 About 30 meters away, she had her baby moose hidden behind a tree. This was in broad daylight, but it was impossible to spot them without a thermal. Or can you see them?

Below: Thermal edition of the picture above, magnifications vary. Moose with the baby on the ground. 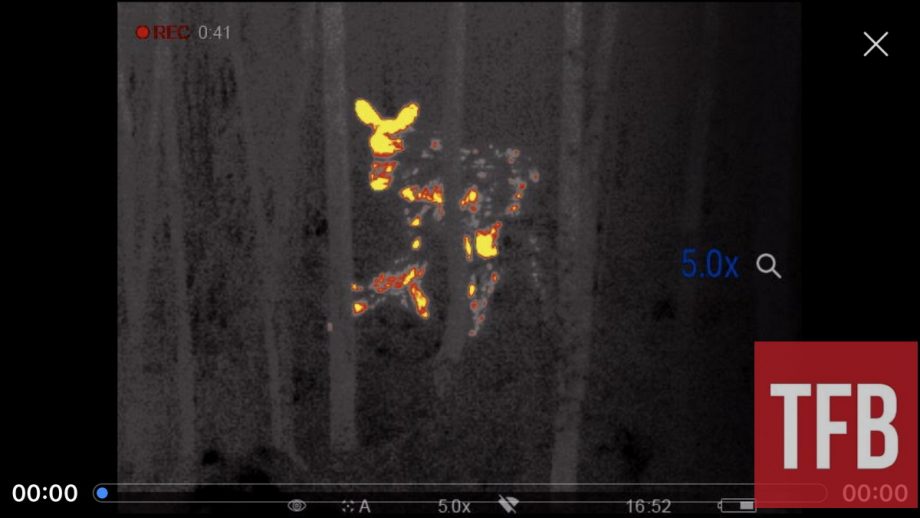 The fearless and angry moose again, on another occasion about a month later, eating our apples.

Note the ears – not recommended, but there was a shelter close-by. 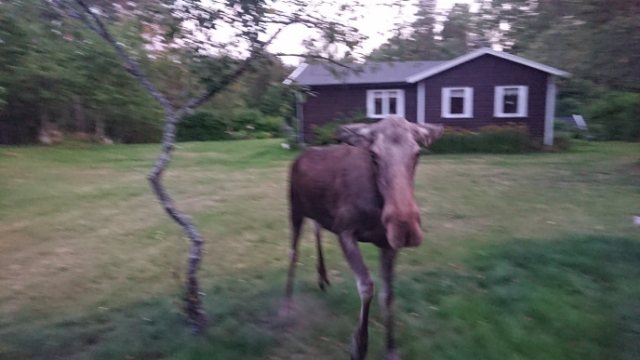 I also had a moment when I stalked some fallow deer on a field. I then spotted a badger. He was minding his own business at about 100 yards (91 m) until he started moving straight towards me. I lasered him at about 15 yards (13 m), then I got pretty scared as he was getting too close and scared him off. Video here.

Below: Wi-Fi is built-in, but I prefer the cable. There’s integration with both iOS and Android devices. Personally, I have no use for this feature, but if you want to see and share your movies and pictures in the field, it’s the only way. 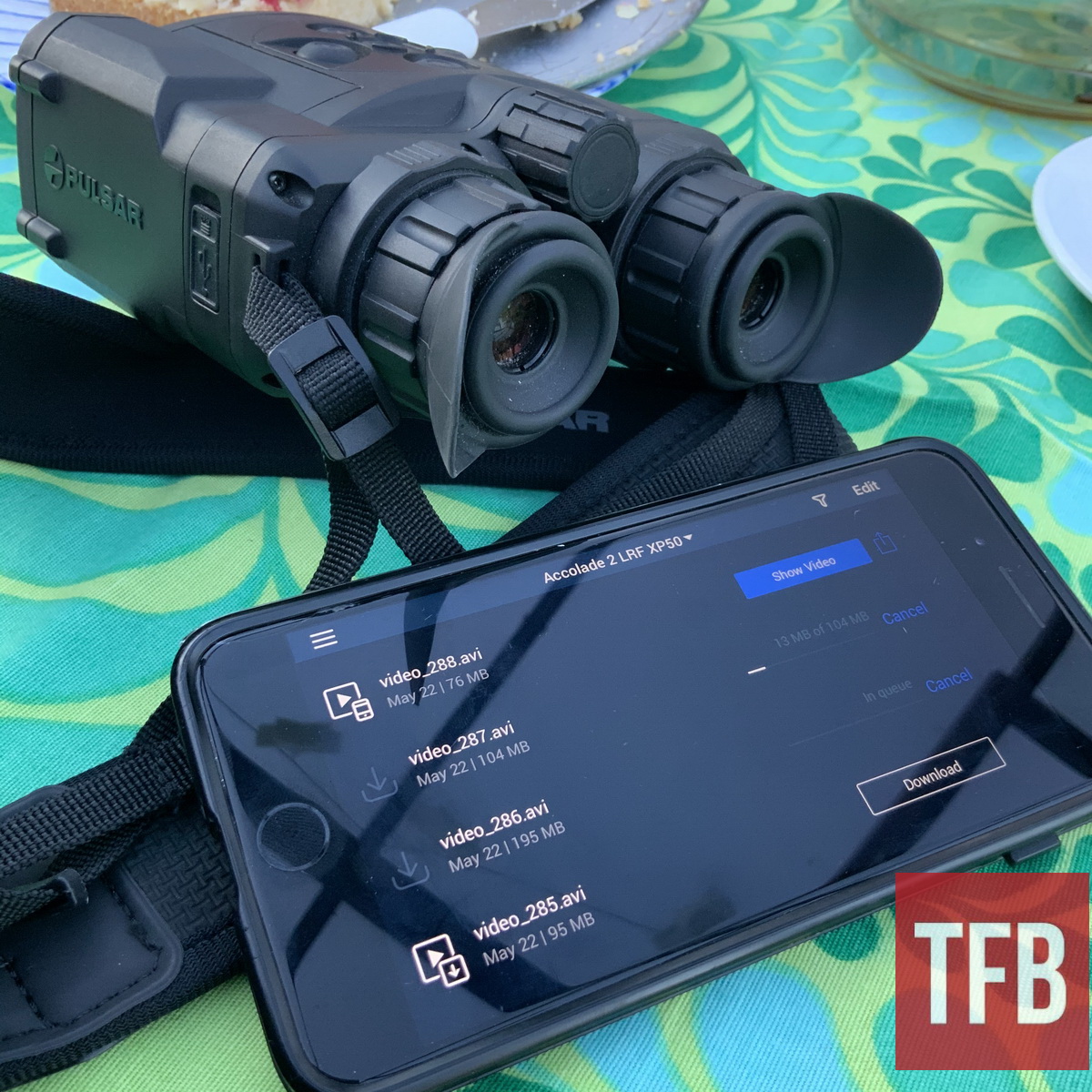 All of the thermal images and videos in this article are recorded with the built-in photo and video recorder, which is extremely easy to use. There’s 16 GB of internal memory for you, which means a huge amount of hours of recorded video that can be downloaded via Wi-Fi or cable and shared.

– NETD <40mK sensor with increased sensitivity and providing a better thermal imaging in adverse weather conditions such as rain and fog.

– Built-in laser rangefinder capable of ranging target distances up to 1 km away.

Pulsar seemed confident that the new version was a lot better than the previous model, and after my testing, I can see why.

Thermal Imaging (for civilians at least) has never looked so good and has never been as affordable as now. The new, much better, unit costs less than the old. Just don’t get the word affordable mixed up with cheap.

After almost 3 months with both Accolade units, I am left with very few complaints, which is frustrating for any reviewer but positive for the supplier and the potential end-user.

On one occasion, I gave the Accolade 2 to a friend for a 2 week “mini test”. Whenever I can, I do this: to either confirm and strengthen my own discoveries or to get new input that I may have forgotten or missed completely. It’s also a way to clear my own bias.

We both agreed that there could be a little bit better tactile feel in the buttons. It’s not a huge thing, but when the package is close to faultless you get nitty-gritty with the details and it’s one thing we’d like Pulsar to improve for the next generation.

Another thing that he pointed out, a thing that I kind of had learned to live with and forgotten, was the focus wheel. It’s just a little too stiff. As you use it a lot it would be nice if there was a little less friction, or if the wheel was a little larger to give you more torque.

Battery life is great. Only if you’re hunting for very long hours or days would you need to recharge or bring an extra battery pack. The battery is not internal, which is positive.

The price is steep for a pair of binoculars that you can’t use as a riflescope, but remember that there are a lot of areas where thermal imaging could be useful. There are also many countries where thermal riflescopes are forbidden. In hunting, some prefer to discover or clear an area with a thermal bino- or monocular, and use a Digital Night Vision like the Pulsar Digex instead.

You can read about the new Accolade 2 Pro here.