THE OPERATING PRINCIPLES OF THERMAL IMAGERS

In engineering, there are notions of object and background. Objects are ordinary things that have to be detected and examined (humans, vehicles, animals etc.), the background is everything else not covered by the object in the field of view (forest, grass, buildings etc.)

The operation of all thermal imaging systems is based on the perception of the temperature differences between two things i.e. an object against a background and on the conversion of that difference to a visible image. Because all bodies are not heated up equally a picture of IR distribution appears. The higher the difference between an objects IR radiation intensity and the background’s IR radiation intensity the more resolvable and with better contrast the thermal image will be. Contemporary thermal imaging devices are capable of detecting temperature differences of 0.015-0.07°C. 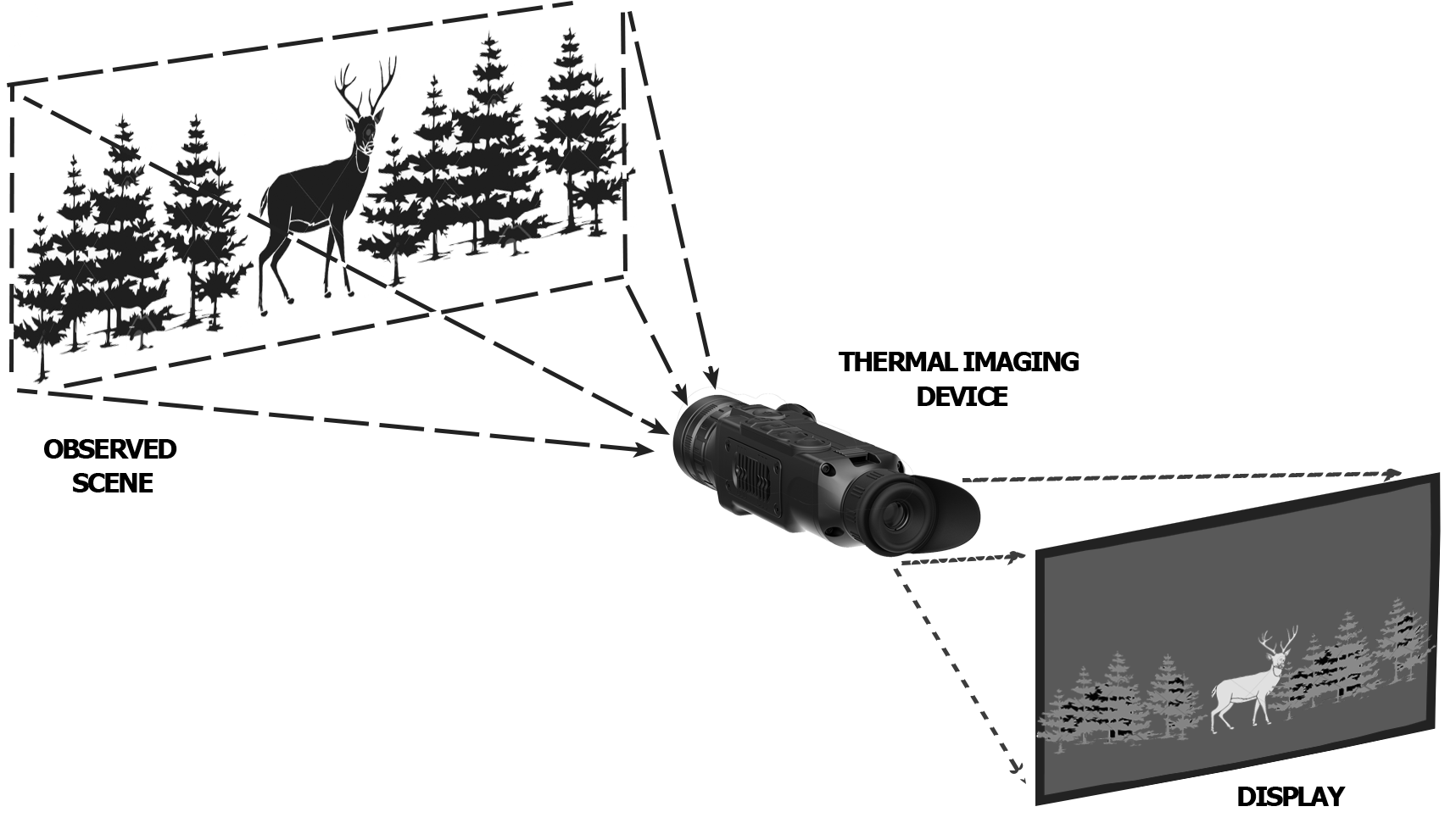 Most of the night vision units based on either image intensifier tubes or CMOS/CCD sensors detect IR radiation in the wavelength range of 0.78-1 µm, which is only a fraction higher than spectral sensitivity of the human eye. Thermal imaging units operate in wavelength range 3-555 µm (MWIR or medium wave infrared) and 8-14 µm (LWIR or long wave infrared). In this wavelength band, ground surface atmospheric layers are transparent for IR radiation and emissivity of observed objects with temperatures -50 - +50°C is the highest.

The thermal imager is an electronic observation device, creating the image of temperature difference in an observed area of space. The fundamental component of every thermal imager is a microbolometer array (thermal sensor) and each picture element of this array (pixel) can measure temperature with high precision.

The advantage of thermal imagers lies in the fact that they do not need any external sources of illumination, they are passive systems which work well in both the daytime and pitch-black nighttime conditions. As mentioned before bad weather conditions such as fog or rain do not create obstacles for thermal imager, these conditions would make ordinary night vision units completely useless.

The operation of all thermal imaging devices can be simply described in the following way:

For instance, brightness and contrast settings, image colour settings, the introduction of auxiliary information in the field of view (current time, battery charge level, icons of active modes etc.), digital zoom, picture-in-picture (displays zoomed image of the observed object or its part in an additional small window) and display OFF functions (used for energy saving and avoiding backlight exposure).

Thermal imaging and digital riflescopes can also have many functions that can aide the shooter such as multiple selectable reticles with various shapes and colours, convenient and fast zeroing functions like “one-shot zeroing” and “Freeze” zeroing, automatic distance-related correction functions, multiple zeroing profiles for different rifles, an indication of side tilt, elevation angle and many more.

In comparison with analogue night vision riflescopes, the reticle in digital and thermal imaging devices is usually “digital”, i.e. the reticle image is overlaid on the scene image by video processing. With the image of the observed object and reticles being located in the same plane (the display plane) effects such as parallax are eliminated. The reticle is moved electronically which allows for the removal of the mechanical correction elements usually found on analogue riflescopes. Therefore these mechanical correction elements, that require a costly precision manufacturing and assembly process, can be enitely removed from digital and thermal devices.

Thermal imagers can also have built-in video recorders for capturing images and videos of observed objects and many other auxiliary functions, such as wireless data (photo, video) transmission (radio channel, Wi-Fi) to external devices, remote control of the unit (using a mobile device for instance), integration with a laser rangefinder (with data from rangefinder appearing on the screen of the unit) and integration with GPS-sensors (geopositioning) etc.