7 Reasons Why You Should Buy a Handheld Thermal Monocular 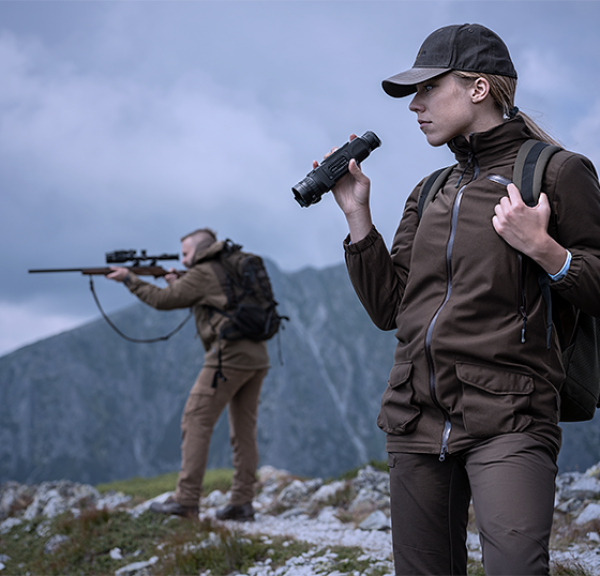 A thermal monocular offers several benefits, some of which you may not have initially considered.

As a deer, hog, coyote and turkey hunter, I am always looking for ways to take the lead. It didn’t take me long to appreciate the benefits gained from using a thermal imaging device.
One of the first benefits of thermal imaging is the ability to enter and exit the woods without spooking deer. When I get to the woods, I scan with my monocular. When approaching my stand, If I see a deer on the corn pile, I simply stop and lean on a tree or sit on the ground until it leaves. Without this ability to see in the dark, I wouldn’t have a clue that deer were anywhere around and I’d be climbing into my stand with the sounds of deer blowing and running off.
That doesn’t happen to me anymore.Likewise, when the sun sets, I always scan before exiting the stand. There have been plenty of nights where I sat in the dark for 10 or 15 minutes until a deer exited my area. But now, because of the thermal monocular giving me vision where I previously didn’t have it, deer are no longer aware of my location simply because I now know they are close by and I don’t make any noise. 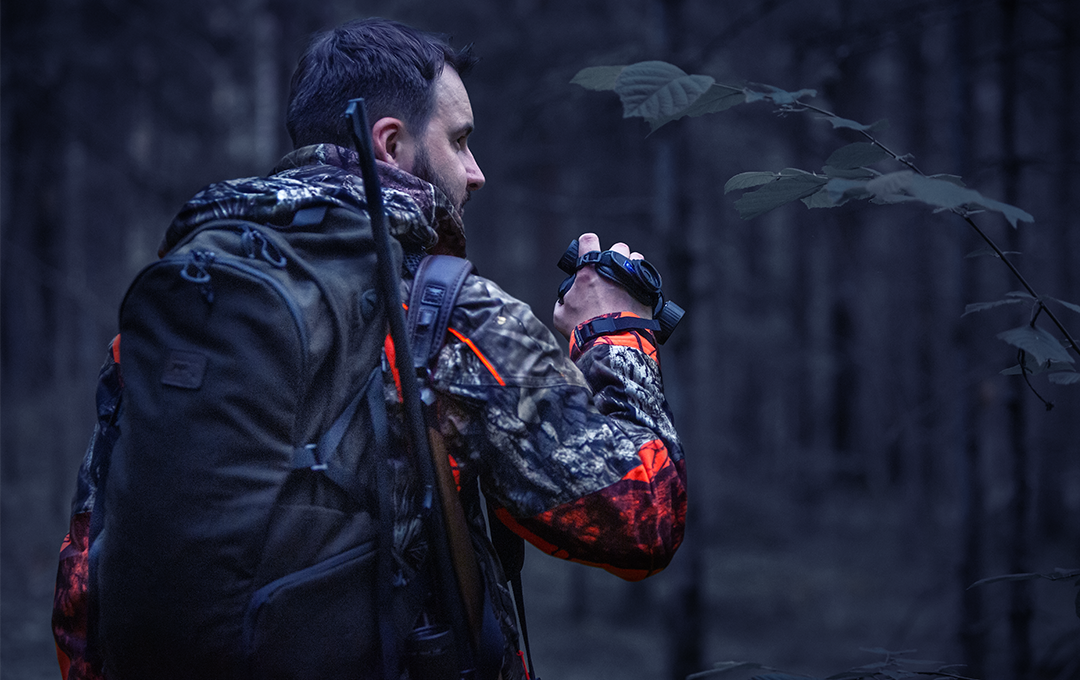 The thermal monocular also comes in very handy when trailing or tracking a deer. If you’ve ever shot a deer right at dark, you know that it can sometimes be challenging to track them. If you made a good shot, then the thermal monocular will likely save you some time. Yes, you should get on the blood trail as you normally would, but also use the thermal monocular to scan the general direction the deer ran. You’ll be surprised at how much more efficient your tracking becomes. I’ve got friends who call me to come help them track deer simply because they know I’ve got a thermal monocular.

Turkey hunting is also one of my favorite things to do. There’s nothing better than watching a big gobbler strut…and then there’s nothing more depressing than not being able to locate any birds. If you know the general area where turkeys are roosting, a thermal monocular will give you a leg up in this scenario as well. Nowadays, I always take the thermal monocular with me when we go in before dark. I scan the treetops to see if I can see any turkeys roosting. Admittedly, turkeys are a little more difficult to pinpoint because their heads are usually the only part that shows a sharp heat signature and during the spring, the trees provide them with more cover. Though, the thermal monocular still provides the opportunity to spot them.

Thermal imaging again gives me an edge, and as you would imagine, we take it and use it as much as possible. Locating birds is half the battle and a thermal monocular helps you locate them more easily.

Our Primary Use — Scanning for Hogs & Coyotes

The most obvious time we use the thermal monocular is for scanning and locating coyote and hog at night. We sit our guns on tripods and use the monocular for scanning and locating. As soon as we locate the game, we then use our scopes. If you don’t have a scanning monocular, you’ll quickly learn that they save your back big time because you don’t have to constantly be hunched over scanning in circles in your scope. Also, the monocular is safer to scan with. When spinning circles with our guns pointing them in all directions, we inevitably come close to other hunters and that’s not a good thing. Since the monocular is obviously not attached to a gun, it’s the safest route for detecting game.

For you rabbit hunters, I know it’s all about the dogs, but if you want to easily see rabbits that are hiding in the edge of briar patches, there’s no better way than with a thermal monocular. We constantly see rabbits in the edge of brush, in straw, and alongside fields while hog and coyote hunting. Want to get your dogs pointed in the right direction?…try a thermal monocular.

There’s not much hide and seek when it comes to thermal technology. If a group of cars is parked around a house, I can easily tell which cars have been there the longest (they are cooler) and which ones have just arrived (they are hotter.) If you ever have out-of-place individuals lurking in the shadows, they are easily picked out with a thermal monocular.
The only area this isn’t 100% effective is in scenarios where there are windows. Thermal detection doesn’t work through glass, because glass reflects the thermal imaging. Other than that, it’s awesome to use to see into the night and get whatever info or recon you need. 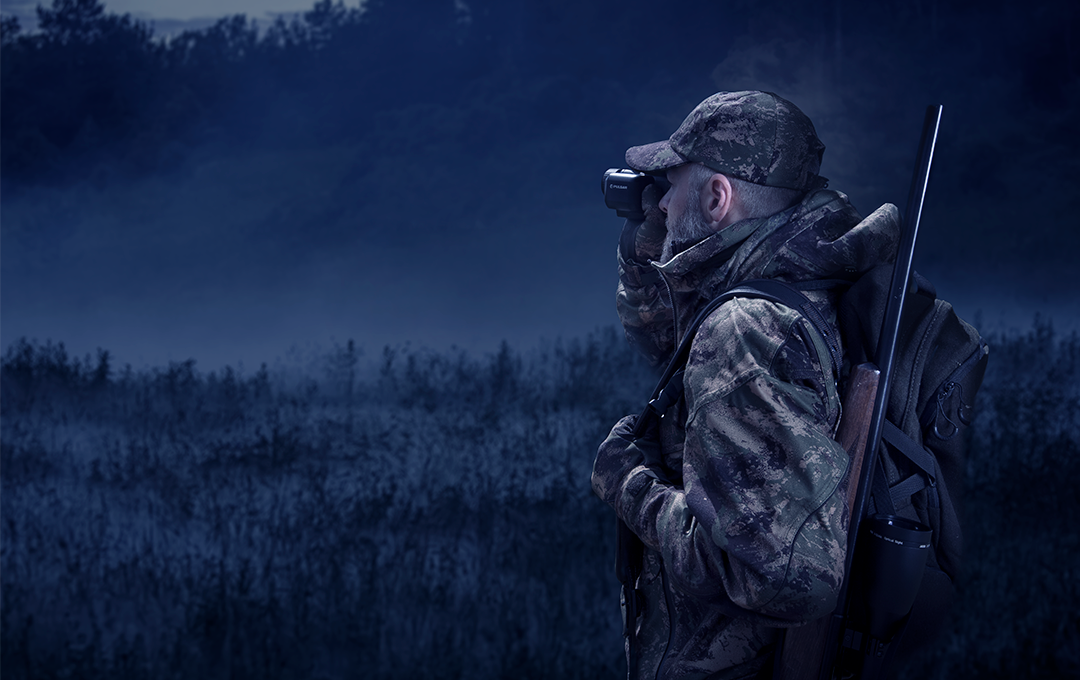 One of my friends is a home inspector. Sometimes he’s looking for locations where heat or cool air may be escaping a house. Imagine an HVAC system that wasn’t installed correctly or if a pipe was leaking. A thermal monocular is a great tool for detecting this. One can easily spot the hottest or coldest parts of any machine that could be “running hot.” Wherever temperature matters, a thermal monocular is potentially useful.

BUT WHICH THERMAL MONOCULAR?

Wondering which device you should use is a common question. After all, these devices are not cheap and as such, these decisions aren’t made lightly. Since the purpose of this blog is to provide insight into ways one can use a thermal monocular, I’m not going to compare all the options out there, but I will tell you I’m a fan of the Pulsar Helion 2 XP50 and it’s what we use on all our hunts.