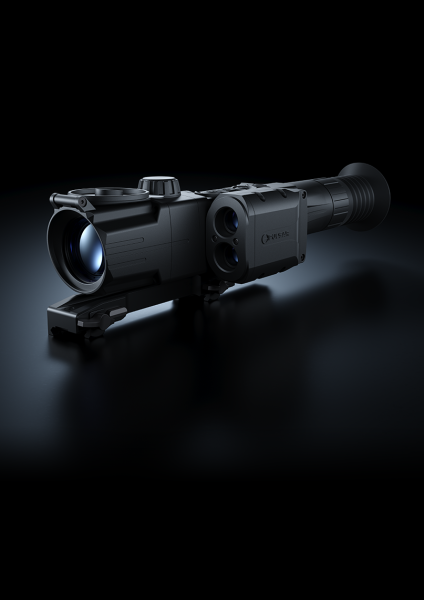 As soon as a new Pulsar Digisight Ultra N455 LRF digital night riflescope appeared, I managed to get hold of one of the first series riflescopes for testing.

Let's start with general impressions. The riflescope body is made of magnesium alloy – just like premium photographic equipment.

The riflescope has a “box” construction, the mounting holes in the base of Pulsar riflescopes enable the mount to be installed in one of multiple positions. This choice helps the user ensure the most suitable position on a riflescope. The mounts and supports are replaceable.

I personally like this particular mounting configuration of night vision or thermal imaging riflescopes on weapons more than standard rings.

It’s not that there are any underlying potential problems when fastening with standard rings, it's just more convenient to use fittings.

The riflescope weight is about 1.1 kg.

A laser rangefinder is attached to the left side of the riflescope. There is an IR illuminator in this position on the Pulsar Digisight Ultra N455, so it has to be moved to replace the battery.

Since an IR illuminator is powered from a riflescope and not from its own power source, the battery configuration had to be redesigned: it has a connector for the illuminator, which is covered with a cap.You need to pay attention to this when ordering an additional battery, the LRF model is named IPS 7A, the standard one is IPS 7.

In terms of capacity, they are absolutely the same – 6400 mAh. Since we are talking about power supply, I will add that apart from additional high-capacity batteries (for example, IPS 14, 12800 mAh), it is possible to connect a regular commercial Power Bank of any capacity via a micro-USB connector.

A battery is charged either via a separate charging unit or via the same micro-USB connector. At a normal temperature (+22°C) a riflescope can work with a standard battery for up to 6 hours.

The battery is held against the riflescope body with a strong lever, there is not even the slightest backlash. There is no risk that the riflescope will turn off after a shot due to contact disconnection.

The riflescope will delight hunters with its waterproof IPX7 standard – you can use it when raining and even “drown” it in water to a depth of 1 m for half an hour. 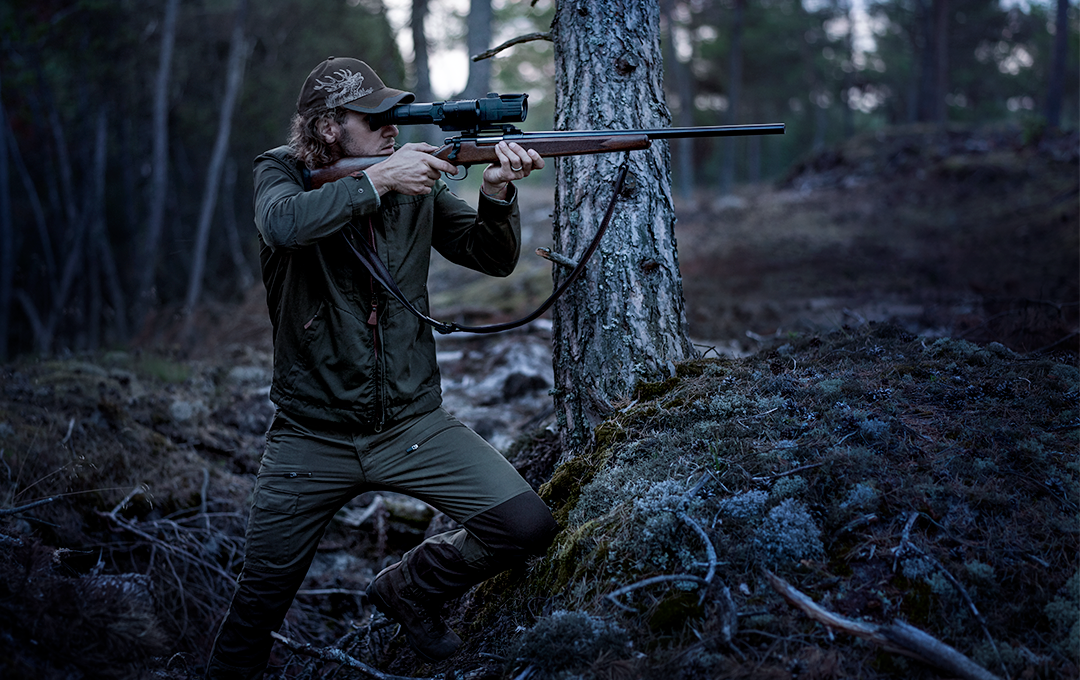 The manufacturer guarantees the riflescope performance even with the largest hunting weapon calibers — 375H&H, 9.3x64 mm, 12 gauge. The maximum cartridge energy the riflescope can withstand is 6000 J.

The riflescope control elements are located on the upper body surface. There is a large lens focusing knob here.

Closer to the middle section of the riflescope, there is a platform with four buttons mounted to the menu navigation and control the most used functions.

The only button on the right hand side of the body is the on/off switch, which is not only for turning the riflescope on, but for temporarily turning the display off/on.

The lens cap is attached to the body and can be moved. The eyepiece is covered with a rubber corrugated lens hood.

At the heart of this riflescope is a HD resolution CMOS sensor with dimensions of 1280×720 pixels. Compared to the previous generation Pulsar Digisight N960/970 LRF riflescopes, this sensor is a quantum leap: its area has doubled. On older devices the sensor size was 752×582 pixels.

At the same time, the sensor sensitivity has also increased due to new signal processing algorithms.

IR illumination assists the sensor, wavelength – 940 nm (N450 – 850 nm). This is the “invisible” range. The backlight has four levels of brightness.

A lens with a focal distance of 50 mm provides 4.5x optical magnification. Additionally, the device has a discrete digital zoom of 4.5-18x.

The specified observation range of a 1.7 m target at twilight or at night is about 500 m.

The riflescope AMOLED display has a resolution of 1024x768 pixels. The display is frost-resistant, it works at temperatures down to -25 °C. A feature of the riflescope is that it completely lacks “parallax” or a target image shift in relation to the reticle, when the observer's (hunter's) eye does not coincide with the optical axis of the observation device (riflescope).

In other words, if the safety hook is fixed and the aiming mark lies on the target, then no matter what angle the hunter looks into the eyepiece at, the mark will be fixed.

It measures distances up to 1000 m with a measurement accuracy of 1 m. There are several operating modes: scanner, single measurement, tilt measurement, measurement of the true distance to the target.

The riflescope has a built-in recorder with capacity for 16 GB of videos or photos. In addition, you can also record sounds as there is a microphone in the riflescope.

Pulsar Digisight Ultra N455 LRF communicates with the “outside world” via a WiFi module. To operate the riflescope, you need to install the proprietary Stream Vision application on your smartphone.

The picture-in-picture function enables the hunter to enlarge the image center showing it on the top 10% of the display.

There is a Zoom Zeroing function for precision zeroing. The indication of weapon incline along the axis is shown on the display in the form of arrows.

The reticles are displayed in 10 configurations and 9 colors. This is more than enough even for diligent shooters. In addition, there are 5 “profiles”, each for 10 different distances. Why so many? Well, for instance, if you have a rifle with interchangeable barrels or you want to shoot with several different bullets of the same caliber – heavy and light. The profile enables changing the reticle without need for weapon re-adjustment.

Believe it or not, the riflescope turns on almost instantly, it takes only a couple of seconds to start the image demonstration.

Another important mode is worth mentioning — SumLight. This is a special signal processing algorithm mode which improves image quality at night. The SumLight mode is like a “reserve button”, something like overdrive or sport mode in a car with modern automatic transmission. It turns on when the riflescope's standard resources have been exhausted, but “just a little” is needed.

The SumLight mode works as follows: noise level is sharply reduced, but the payback for this is a decrease in the image frequency, which will lead to a blurred image when the object is moving or when the riflescope is moved abruptly.

Despite the official “night” purpose of the riflescope, the Pulsar Digisight Ultra N455 LRF can be used during the day. Of course, in this case, its “effective distance” increases sharply. In fact, this riflescope has become more than just a night vision device — it is a universal sighting system. With the help of the Stream Vision program, which has a built-in ballistic calculator, it is possible to calculate the bullet trajectory for the hunter's specific weapon. Alternatively, it is possible to use already loaded cartridge profiles. A laser rangefinder, which is always at hand, will prevent making mistakes at a distance.

Nowadays the Pulsar/Yukon line of riflescopes enables the hunter to choose the optimal product for a specific task: from the low-budget Yukon Sightline N455S to the professional Pulsar Digisight Ultra N455 LRF.