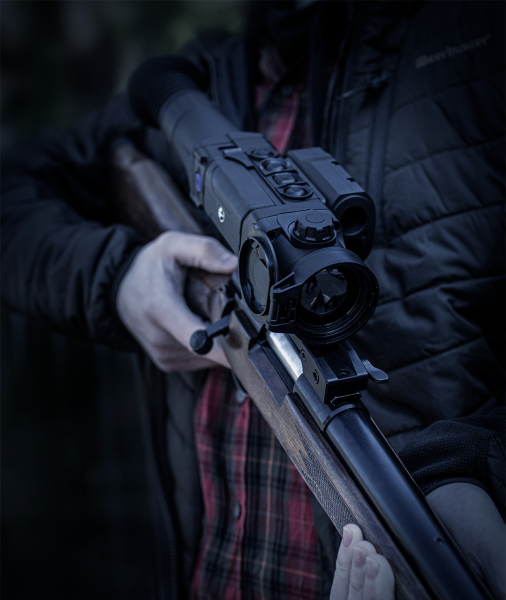 Since 2019, it is permitted to use thermal and night vision scopes when hunting wild boar in Sweden.
Some scopes "see" heat radiation, others convert invisible infrared light to a visible image. We tested seven thermal sights.

FACTS
Since 15 May 2019 the Swedish law allows hunters to use night vision, image intensifier. Image converter thermal imager or variable lighting mounted on weapons used for hunting wild boar. Thermal sights may be used for hunting wild boar on a feeding place or in open terrain. You may not use night vision or thermal in hunting other game. They may be used for searching on wounded game.

The new law differs between thermal sights and other night visions. The thermal sights are only allowed to be used on open terrain like fields or on feeding places for wild boars. The reason for that is that the technique is considered to give worse prerequisites to assess the surrounding terrain, e.g. such as among vegetation that can affect the bullet and to see where the bullet trap is. Certainly there is basis for that when the distance is growing. There is also a clear difference between the sights. The best models show the landscape well and allows you to assess the bullet trap.

Short depth of field
Under good conditions thermal sights can reveal small branches but that decreases as the distance increases. The hunter may adjust the focus to the objects and that may vary so the branches will disappear. The other technique, infrared sensors, works with infrared light from a light source and it can be used according to the law to more hunting scenarios. They usually give a more detailed picture of the surroundings close to the hunter. On the other side these sights do not give you the overview on the scenery like the thermal scopes do. You can only see what the light source can illustrate. Sometimes the light source reflects from leaves, trees that are close to the source, which cause a bright light in your scope. And when the object is further away so the light source is not strong enough, the picture will appear blurry and weak. There are both benefits and disadvantages in the most common night vision techniques.

Better search after wounded game.
If you want to survey larger areas quickly the thermal imaging is very difficult to beat. It will also reveal whether there are other wild animals in the vicinity of the one you intend to shoot. Good thermal sensors will simply everything, from wild boars to mice. They can even help you find blood and heat trails.

We have not hunted with the sights in the test. However, they have been tested at night at Öster Malmas game enclosure, where we were able to calmly compare them against each other and look at how they perform in the terrain and be used in hunting scenarios.
The quality of the picture gives the higher points in this test. The more details that are visible in the scope the higher score the scope gets.

Many thermal scopes offer a range of functions and finesses. Not all functions are necessary for hunting and only a few functions have been getting points. If we should have written about all the functions the test would be too big for this paper.

This is how the test was performed.

Format
Length, weight, mounting, magnification, field of view, eye relief and so on get no points.

Sensor and screen
There is a lot of information on the scopes ability to deliver a god picture. We couldn’t check them easily so we only report the facts. We clarify the size of the thermal sensor in pixels. If there are facts on pixels pitch in microns we will wright it as well. This is a measure for how much the image is able to zoom without it starting to pixelate. Lower is better. The sensors’ ability to read heat signatures is graded I millikelvin. If we have the facts on that we will wright it as well. Lower is better also in this matter. Underfrequency is stated in hertz. The higher hertz the smoother the picture is perceived for the viewer. We clarify the pixels in the display and what type of display the scope is uses.

Battery
The battery consumption is affected by the usage of the scope and is hard to test fairly. The battery solutions can differ between the brands. Some scopes use internal batteries which will give a longer battery time. Some scopes use interchangeable batteries with more or less performance. We clarify what type of batteries that are used but we don’t give any points for the performance. It’s up to the user to decide how long battery life you need for your type of hunting. If the weather is cold you need to calculate shorter battery life, and also if you use the menu frequently and brightness on high the battery life will reduce.

Picture
This is the core in this test. The scopes where compared against each other in calm situations in a game enclosure and over large fields where there is a lot of game. Scopes with high resolution and high performance should show good results in the test. But we valued the picture with no regard to what we should see. An important part of the test was to observe wild boars in 40 to 60 meters. The experience of the overall picture and details has been evaluated in varying degree of magnification. If we experienced a sharp and nuanced picture and all the details have been easy to distinguish then the highest point for the picture was 15 p. Ability to spot small animals and partially hidden game between 300-400 meters have got the highest point of 5 p.
To spot details on that range was impossible with all scopes but those scopes that could deliver a picture that could show a silhouette that could identify a specific game got the highest point of 3 p and dropped ranking. Species identification was made by behaviors and movement. The possibility to identify ground and bullet trap got the highest point of 5 p. To identify vegetation in front of the game may require focus at different distances. But the sights draw twigs and branches differently clearly and solve the problem differently well. The richness of detail can give a maximum of 3 p. An image that never lags can give a maximum of 5 p. Otherwise deductions have been made in relation to how extensive and disruptive the legislation has been. If the image does not croak when swiping over an area 3 p. If the sight worked completely silently it has got 2 p.
Maximum point for picture: 41

Controls
If the sight is ready to work within a maximum of four seconds from the first key press, it gives 5 p. Thereafter, each four-second period costs one point. The sights are set with buttons, menus and knobs . We considered scoring how easy they were to handle, but decided not to. All are relatively easy to handle when you have learned how to do different steps, but read the manual. It saves time. You will adjust the focus and surely change the magnification and brightness. You probably sometimes work with contrast and sensitivity.
So-called picture in picture (PIP) gives a smaller but higher enlarged picture of goals and guidelines above the ordinary picture of target and reticle. It may initially feel unusual, but gives the advantage that you can fine-tune the small enlarged image while keeping an overview and can perceive animals around your target in the main image. PIP gives 3 p.
The possibility of menu selection for the sight at work in different environments such as forests, cliffs or fields gives 1 p. The possibility to choose between at least 4 different reticles gives 1 p. The ability to select at least two different color scales in the image gives 1 p. At least five different color scales in the image give 5 p.
Maximum point for controls: 12

Zeroing
The sights are generally easy to zero. Go to the correct menu and adjust the hit position there. For some users, it is interesting to be able to save several different zeroings that apply to different weapons, ammunition or distances. Every zeroing that could be saved at the same time gives 1 p, up to 4 p. Some sights can work with ballistic programs that can correct the trajectory of the bullet (possibly via an app). It is not necessarily of great value in a night vision. But gives 1 p.
Maximum points for zeroing: 5 p.

Rangefinder
The distance can be important, but it is difficult to judge in a night vision. If the scope has laser rangefinder it gives 5 p. A simple measuring function based on the size of the game can give 2 p.
Maximum point for rangefinder:5 p

Film and photo
The possibility of photographing or filming can be interesting and can in some cases facilitate a possible search. Image gives 1p. Film gives 2p.
We have not put any value in image or film quality, so if it is interesting to you, it is wise to check the manufacturer's details on format. If the sight has the ability to automatically film and save the shot, it gives an additional 2 p. If that function is easy to activate manually 1p.
Maximum point for film and photo: 5 p.