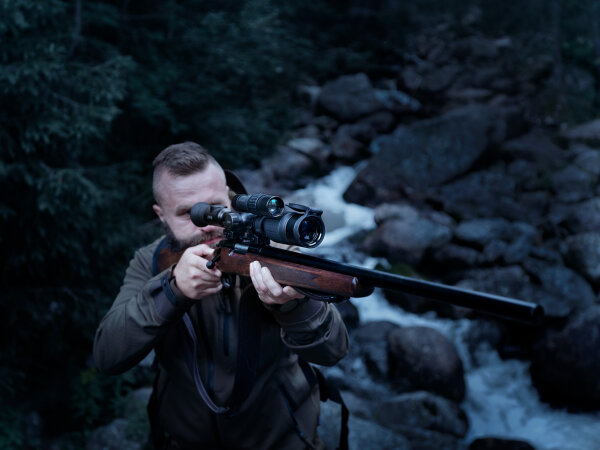 Hunting is a hi-tech hobby. "Smart items”, whether it is all-weather clothing, or reliable and accurate weapon, means of communication, navigation and transportation, optical and electronic devices, do not replace experience and skills (they actually require more thinking and knowledge how to manage), but they rather make hunting comfortable, profitable, responsible and resource efficient.

For the 2019-2020 season, Yukon Advanced Optics Worldwide has come up with two new Pulsar-branded devices - a digital night sight and a compact-size thermal imager. This is not about slight changes in serial production devices. Both Digex and Axion are real latest releases that make up a promising hunting kit.

Axion is similar to a dual-channel laser rangefinder in weight, size and design. The device easily fits in a standard pocket, it also offers a nice grip. It has push-button controls. The buttons are arranged in-line, along the optical axis and centered, which enables easy both right- and left-handed operation. The buttons have a distinctive feel, their function and location clearly discernible by touch. The housing is made of magnesium alloy, so Axion is as rugged as it is light. The device remains operable even when fully submersed in water, so heavy rain, fog or wet snow are Axion’s expected and usual operating conditions. 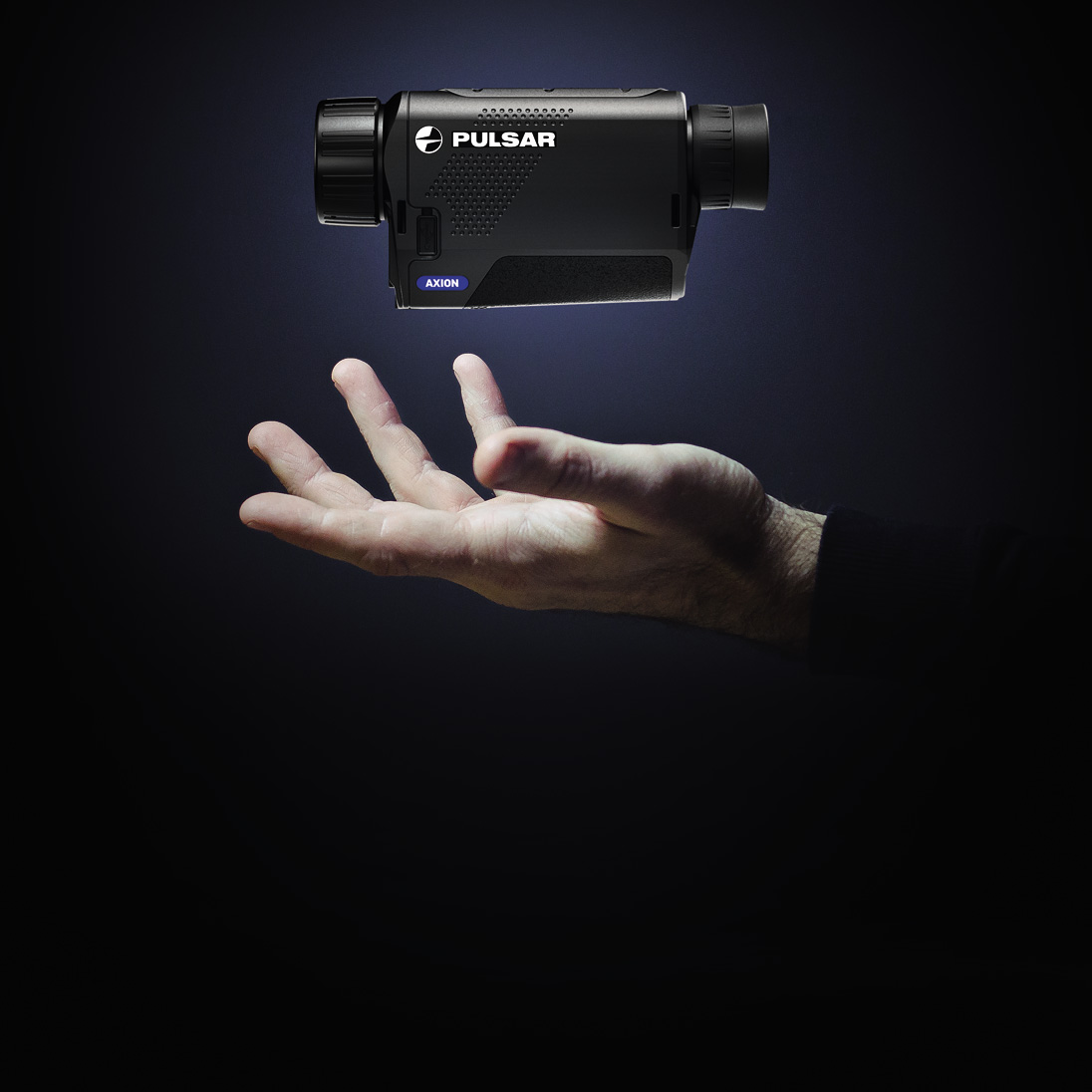 Portability is the more valuable the fewer corners the designer cuts to achieve it. Axion runs on the original small-sized Pulsar APS3 rechargeable batteries. A fully charged battery provides uptime of 4.5 hours, so when gearing up for a longer hunt an extra battery in the pocket might come in handy. The full battery swap takes no more than 3-4 seconds. APS3 are charged in a battery charger that can charge two batteries at the same time. When you don’t have a spare, Axion can be powered by a 5-volt power bank via a USB port. In the meantime, the depleted battery in the battery compartment will also charge up.

Axion is characterized by a short switch-on time. Power-to-operation time is only 4 seconds, when the image appears and the functions are accessible. When one gets nimble-fingered enough, the device can be turned on in the pocket (one can definitely operate Axion blindfolded) and brought up to the eye already displaying an image. In cases of short pauses in the observation, the display can go to a sleep mode. The screen turns off to prevent the hunter from getting spotted, but the device is still on, and you can go back to observing in one touch of a wake-up button.

“Picture-to-picture” is a useful function. It enables displaying an additional frame of an enlarged central area image. This extra frame occupies 10% of the display area, not obscuring a full field of view. Interactive range-finding scale will also be useful when hunting. It will help to estimate the distance to objects with a height of 30 cm (hare), 70 cm (wild boar) and 170 cm (deer). The observed image is visualized by eight switchable color palettes, including the conventional “white-hot” and “black-hot”, the mode for highlighting the warmest objects in red, “sepia”, “monochrome red ”, etc.

Axion thermal imager sensors are supplied by Ulis. The microbolometric imaging sensor resolution is 320x240 pixels, the pixel size is 12 microns (it is due to the smaller pixel size that Axion offers a better detection range with equivalent-focal lenses than devices with 17-micron or 25-micron sensors).

The key specs of the devices have been presented above, now it’s worth talking about the unique features, which are also numerous and include both hardware novelties and resulting functions.
Axion XM30S comes with a frost-resistant AMOLED1024x768HD-resolution display with operating temperature range from -25 °C to +50 °C. The result is a clear image with a quick response, without delay even in a severe frost.

Axion XM30S features an integrated video recorder. Most people, whatever gender, age, wealth and social status, employ and enjoy the social media communication in respective communities, and visual aids such as photos and videos are powerful means of delivery. So, while acknowledging that video recording is not a must for a thermal hunting sight, we also agree it will be less of a device without it.

The “fully-featured” version of Axion syncs over via Wi-Fi with iOs and Android smartphones and tablets running the proprietary Stream Vision app. The app is used to check thermal imager firmware updates to be downloaded and installed by the user. The update function serves both the user and the manufacturer – new firmware adds features, improves the available functions, deletes bugs, boosts performance. All this happening without sending the device for service. A recent example is the August ’19 software update for Helion and Accolade thermal imaging devices, which improved image quality and increased the detection, recognition and identification capacity in difficult observation conditions. In the meantime controls were improved with buttons reassignment. Those, who bought their Helion devices in 2016, surely appreciated that.
Stream Vision is a kit for device control. A smartphone turns into an external monitor and a remote control. It can be used to adjust brightness, contrast, switch color palettes, calibrate the sensor, change zoom, start video recording... Another advanced user feature is – direct streaming to YouTube.

The entry-level line, Axion Key, has neither a video recorder, nor smartphone connection. LCOS-display with a resolution of 960x720 pixels is restrictive in terms of using Axion Key in cold weather (not lower than -10 °C). The price of the Key line devices is lower.

It is easy to describe both Digex and Axion in one article. The devices are similar in functions and features: built-in video recording, remote software update and other benefits from connectivity via the Stream Vision application, instant start-up, operating temperature range of -25 °С ÷ + 50 °С, a fully waterproof design, a stadiometric rangefinder.

Digex is the first commercially available night sight styling the classic daylight optical sight design, the resemblance is uncanny. The visual aesthetics aside, the daylight optical sight form factor offers a number of operational advantages. The sight is mounted using standard 30 mm rings, the choice of mounting options is huge and covers the most extreme cases. 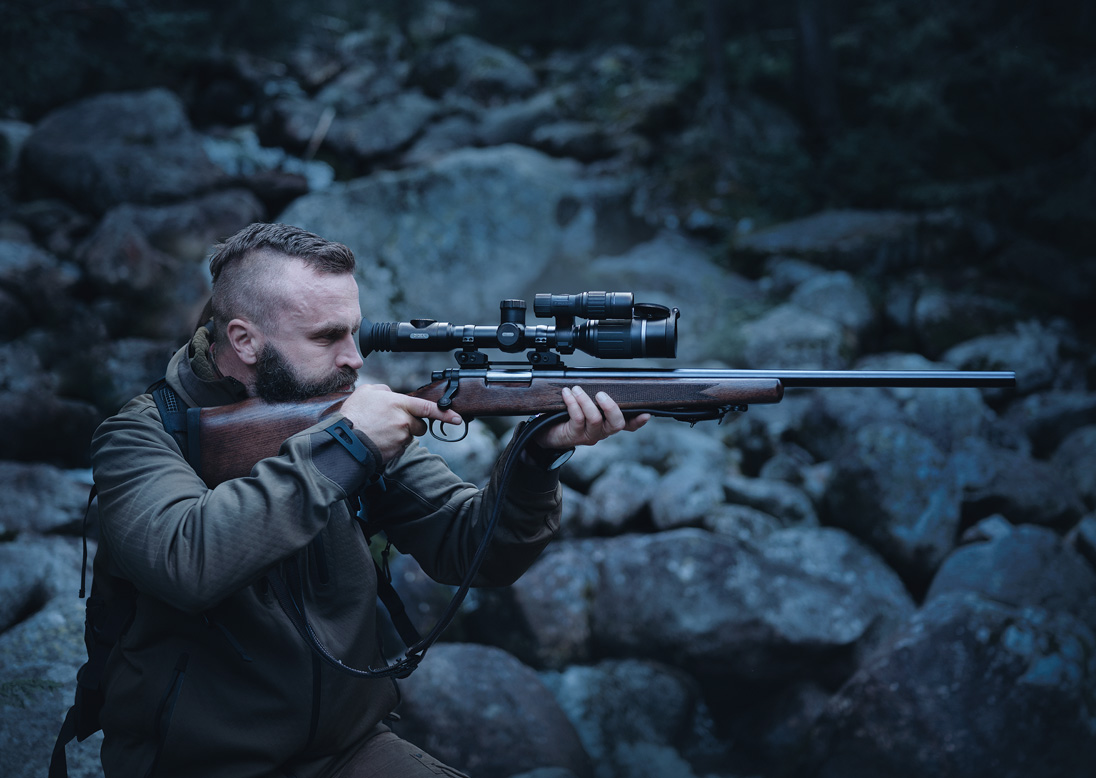 The 50mm-focus lens with an aperture ratio of 1:1.2, the wide-angle eyepiece, the 1280x720 sensor and the 1024x768 AMOLED display produce such level of detail that ensures reliable animal identification. HD resolution of electronic components, night sensitivity in 800 – 950 nm wavelength range, variable 4-16x zoom and a powerful IR illuminator ensure 500-meter detection range for an elk or deer.
The picture-in-picture function (mentioned in the Axion’s description) shows a full extent of its power in these sights: the extra frame is used for high-precision aiming at high magnification, and a full field of view is used to manage the situation after a shot.

In most markets, Digex is represented by two models, N450 and N455. The difference between Digex N455 and Digex N450 is in a supply kit – the “invisible” attachable IR illuminator with a wavelength of 940 nm versus a “long-range” one with a wavelength of 850 nm. When opting for one of the modifications, a hunter can re-equip it at any time – IR illuminators are available separately as accessories. Digex IR illuminator works independently of the sight, power supply and controls are separate. The illuminator is placed on the middle part of the Digex body with a 30 mm quick-release mount.

Digex is powered by two batteries. The first one is built-in, the second one is replaceable. When a replaceable battery is discharged, the sight automatically switches to the built-in one. The replaceable battery swap takes mere few seconds, after which the sight switches back to it. Digex is fitted with Pulsar APS2 battery with a capacity of 2 Ah, replaceables are APS3 – the same one as used in Axion.

Digex memory stores 10 replaceable reticles – direct shot, ballistic, scalable, and fixed dimension. Part of the ballistic reticles are scaled in proportion with the zoom variability, as are the FFP reticles of daylight optical sights – determining the distance to a target and making adjustments for the distance are made quickly and accurately in a full range of magnification. Digex zeroing can be made at zoom, while the pitch per reticle decreases in proportion with zoom. When zeroing at 16x magnification, the pitch is less than 0.1 MOA – zeroing is performed with surgical precision. The results of zeroing are stored in a shooting profile. Digex memory contains up to five shooting profiles for several types of weapons or ammo. Up to ten adjusting points are stored within each profile.

Digex controls are user-friendly and reasonable. “Hot” functions are bound to dedicated buttons on the eyepiece, literally at hand. Additional functions and the menu navigation are done by the encoder, which is activated by pressing and rotation.

Digex and Axion are stand-alone devices. They punch well above their weight. Axion is an excellent long-range detection device, the simplest modification offers almost a kilometer. Light weight and compact size ensure it does not become a burden during long hikes. The Axion product line is quite comprehensive – one can definitely choose a model fit for their purposes. Digex is all about resolution, advanced shooting functionality, shock resistance, i.e. all about making a right decision about a shot. Together they form a reliable duo, demonstrating synergy from the smart use of multifold technical solutions and features for the execution of one task. While also proving that one plus one is sometimes more than two.