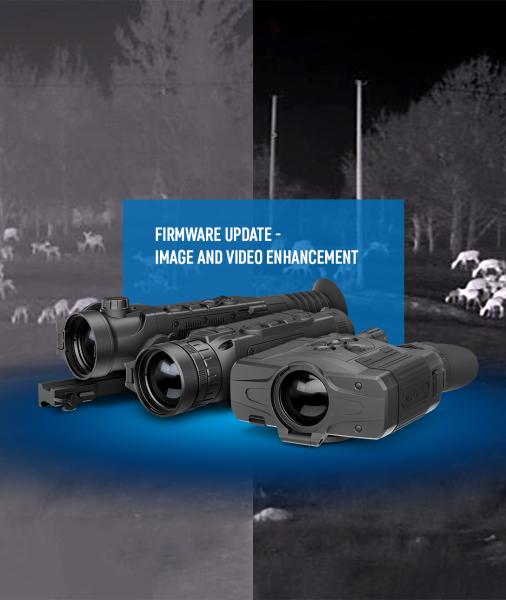 We have some great news about our latest firmware update leading to significant increase in sensor performance and video recording quality.

A specifically assigned “Up” button in Helions will now be used to quickly switch between new observation modes in various conditions. PULSAR is constantly working on progress in the field of image processing algorithms. As a result of research and testing, the company has successfully implemented the support of the enhanced Gain mode, which significantly increases the ability to detect, recognize and identify objects in conditions of low temperature differences.

We would like to thank our fans for their input! Due to numerous requests from users of PULSAR products, the new algorithms will be implemented in the company's current product line with the release of the next software update. Optimization of gain enhancement algorithms will allow to achieve an increase in sensor performance while reducing power consumption of the device. The changes will be visible in the following observation modes: Identification, Forest, Rocks.

After the software update, the modes will be more optimally configured for work in various conditions.

To get the software update downloaded to PULSAR device the users need to use their smartphones and install the free “Stream Vision” application from Google Play or App Store. Via “Stream Vision” every user can connect to his PULSAR device and upload the latest software updates. Firmware updates are available for riflescopes PULSAR Trail XQ/XP, monoculars Helion XQ/XP, Lexion XQ/XP and binoculars Accolade XQ/XP.

You can check the latest firmware number of your device in official Pulsar website.