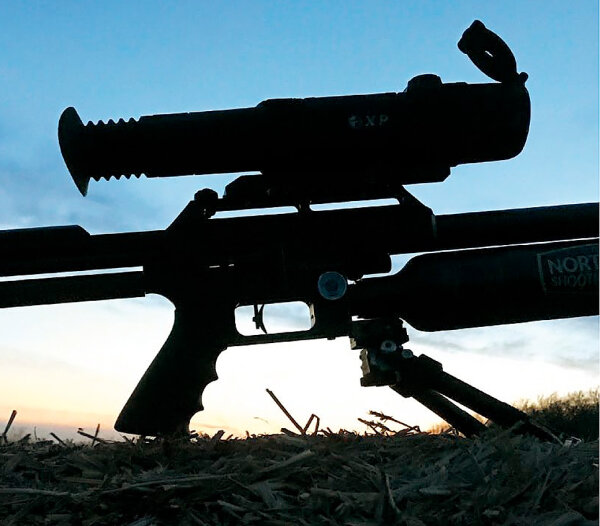 I have said it before and no doubt I’ll say it again, technology is moving fast and the latest offering from Pulsar is a perfect example of what’s now available in the digital nightvision market. Every month, it seems there is something new, but the recently released and much anticipated Pulsar Ultra N455 digital night scope is setting the bar to new heights. The Ultra is now on the shelves and flying out, by all accounts, which is no surprise to me.

I first encountered the 455 back in January at the Shot Show in Las Vegas, and my initial thought was, ‘When can I get my hands on this for real-time testing?’ The controls are mostly a mirror image of my Pulsar Trail, so there was no getting accustomed to the operation of this great unit. I’m not going to go into the deep techno details of the 455, but suffice to say, it is greatly improved on the older 355 model with full HD, CMOS sensors, hi-res display and high magnification to start with, makes it a cut above the rest. Everything is controllable via the Stream Vision app on your smart phone and the usual video and photo capability is also built in. Five shooting profiles, with up to ten zero distances per profile, are also packed into the 455. One-shot zero with multi reticle colours and design are yet more winners, along with built-in stradiametric rangefinder and cant warning.

So, with limited time before my deadline it was time to mount the 455 on the .25 FAC FX Impact. This is a piece of cake with the supplied one-piece mounts, and then an alignment and zero check at 25 yards confirmed all was well. The included detachable IR lamp is good, but was swapped out for the Wicked Lights A51IR, which give me the option of both 850 and 940 IR outputs, along with the red LED if needed.

Scott Country International supply a kit that includes this very torch as part of the set-up. The supplied IR is easily removed by means of a plastic lever built into the lamp, which once removed reveals the power connections and a short Picatinny rail. A cap covers the power connections and the IR torch fits straight onto the rail, giving the extra distance needed for stalking my prey for the evening, the rabbit. My permissions are pretty low on rabbits and I generally don’t go after them in a big way, preferring to leave them to breed for the future. For me, it’s not eradicating the target species but more like creating a balance and with this in mind when I go ‘on the rabbits’ I set myself a limit and tonight that would be no more than six as a maximum.

First things first, though, and the following day a proper zero of 50 yards needed to be sorted. I have been toying with the idea of upping the power on the Impact. I’ve been running it at power level 4 on the dial as a compromise between power and shot count, but I have recently bought myself a carbon-fibre day bottle from Best Fittings, and shot count is no longer a worry. I also think it is well documented that the FX Impact runs much sweeter at higher power, a fact that was confirmed to me by my brother, Richard, in the States, who was getting superbly small groups at 60 yards from a full mag’ on full power, straight out of the box. So the bullet was bitten, so to speak, and the dial turned.

My zero was set at 50 yards and the groups were excellent despite the wind trying to mess things up for me. It was getting toward dusk and the badgers were starting to show, but in this particular field there was not one rabbit to be seen – no big deal because this wasn’t where I was planning my ‘air attack’.

The field for the evening was only a short drive away and was sometimes used as a paddock for the farmer’s horses. They were kept elsewhere during the winter and early spring, so I had full rein here. The field slopped gently toward a treeline edged with brambles and gorse, which the rabbits love, and the top end was lined with a hawthorn hedge that ran alongside the road to the farmhouse. There were street lights on the road that actually helped me in the way of creating a shadowed area just below the hawthorn hedge, giving me a perfect place to lie up totally unseen by my quarry. The breeze that had been present during my zeroing was now gone, but the cold was very much a feature. I had opted for my old Jack Pyke Evolution gear with a couple of base layers underneath, and after finding a comfortable grassy knoll to sit on, against the shadowy hawthorn, I was ready.

The tried and tested method of spotting with the thermal and taking down with the digital night vision was my attack method tonight, and with a maximum viewing distance of 100 yards before the drop off, the game was on. If I needed to get closer it was easy to traverse in the shadows without causing alarm and getting to within 45–50 yards would be easy – closer, if possible.

The base mag’ on my Quantum XQ38 thermal spotter is 3.1x, which is perfect for all my needs; the base mag’ on the 455 is 4.5x, which although isn’t greatly more than the spotter does actually make a big difference to how you see things in the viewfinder. It makes them appear huge, and when the mag’ is upped to its full 18x, you can fill the screen with the image. The pixilation is nowhere as bad as other NV scopes and although not crisp, the target is easily identified for what it is. One thing I find seriously impressive is the recording. On the Photon RT I’ve been using recently, it’s quite a reach over to access the button, even when rested on a bipod, but the ‘record’ button on the Ultra is set toward the rear and is much more accessible, although you wouldn’t have thought it with the lack of rabbit pics I took. I’ll put it down to the excitement of the moment and I’ll sort that for next time.

Darkness had fallen and I was installed in the shadows so it was time to get down to it and start taking a few rabbits. I have watched this field many a time on my way home from foxing, and the rabbits start to show at the far end and appear closer to me as the night progresses, so my chosen ambush point would serve me well, I knew it. They started to appear as predicted, and slowly, one by one they appeared down the field in front of me. Confident that I could move at will in the shadows, I shuffled around to place the Impact on my knee for a shot at the first rabbit within decent range, and schwack! The first one hit the deck with an Air Arms Diablo 25gr straight between the eye and ear, the unmistakeable crack from a well-placed headshot is something to appreciate and even though the rabbit is down and out of sight, you know the shot is good. The image on the 455 is superb and the rabbits take very little locating. Once you get eyeshine, it is game over. The crack spooked the rabbits for a while, but they would be back out – ‘they always come back’.

The next 20 minutes seemed like an age, but just as I was contemplating a move, out popped a huge rabbit. It was so big that I thought it might have been a hare, but no, its ears confirmed it to be my target species and at a range of 48 yards, it was a straight-on shot. The following crack confirmed a direct kill from another headshot, and this time I could see the lifeless body lying up on the grass. Two from two and there were still a few showing further up the field.

Keeping low and in the shadows, I moved up around 100 yards to get within a good distance of the next target. Once more, the Diablo delivered the message and it was three from three. Pacing out the retrieves confirmed my rangefinding had been spot on, but also sent any other rabbits on their toes. The three rabbits were prepped in the field and stashed in the truck before I took one last tour of the area. Two more little ones were taken, which actually looked much larger in the viewfinder, but Zeva Blue loves his rabbit tender and they would not go to waste. I’m already looking forward to more nights out with the Pulsar Ultra N455 and daytime shooting too because the daylight images are, dare I say, pretty awesome. See you next month!