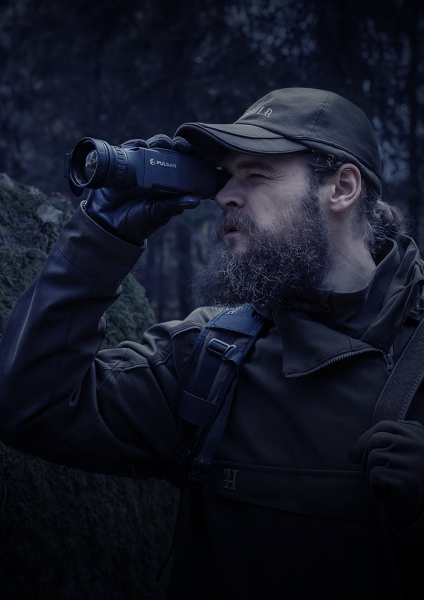 This year, the Pulsar Helion range of thermal imaging monoculars has been updated.

I want to point out straight away that the main difference between the XP and XQ series is the size of the sensor used (640x480 and 384x288 pixels, respectively). Other differences are not as significant.

The fundamental difference between Pulsar Helion 2 XQ50F and the first-generation devices lies in the bolometric sensor. At first glance, matrices of both device generations have similar characteristics: 384x288 pixels, 17 μm pixel, and an operating frequency of 50 Hz. But in fact, there is a difference. More recently, when describing thermal imaging devices, another feature has been used: thermal sensitivity of the sensor or its ability to “catch” the temperature difference between adjacent points. This indicator is called NETD and is measured in millikelvins (mK). The lower the NETD value, the better the thermal sensitivity. NETD value for Helion XQ matrices is less than 40 mK compared to 50 mK for the first-generation devices. The qualities of matrices with a low NETD value are especially visible in difficult conditions with low temperature contrast: rain, fog, snow, etc.

The second important difference between Pulsar Helion 2 XQ50F and similar devices of the first generation is the new high-aperture lens. With the same focal distance of 50mm, Helion 2 has an aperture value of F/1.0, while Pulsar Helion has F/1.2. For those who are fond of photography, this parameter will be clearer. Broadly speaking, the larger a “hole” of the optical device lens, the more light (or heat radiation in the case of thermal imaging) is absorbed and the more detailed and better an image.

Another series of improvements relates to signal processing algorithms. We have already seen that even a common software update sometimes allows for a better image quality on the same device. Furthermore, additional modes appear that improve the image quality and details, such as Image Detail Boost.

It should come as no surprise that all these improvements required the installation of a new AMOLED display with a resolution of 1024×768 pixels compared to 640x480 pixels in the first generation of Helion thermal imaging devices.

I suppose these are all the differences that affect an image quality.

Now, let's focus on the novelty features of Pulsar Helion 2 XQ50F, which are not directly related to observation, but nevertheless are important for users. The most noticeable difference compared to the first series is a new device body made of magnesium alloy. The use of this material improves the cooling of the device and increases body strength. I would like to point out that the use of magnesium alloys for device bodies is typical for premium photographic equipment.

In theory, the improved cooling provided by a metal body compared to a plastic one reduces the sensor noise level.

Another feature is a blue on/off button that is visible even in the dark.

In regard to technology and software, the changes are small. One of them being an increase in memory for image storage (from 8GB to 16GB). The main differences are found in the version 4.0 and onwards. At the time of testing, the device was installed with the software version 4.7.001. Its main differences include improved image processing algorithms and Image Detail Boost functions mentioned above. (Version 4.9.001 is available today, where the number of language versions of the graphical interface presentation has been increased).

You can always download software updates using the Stream Vision application, which connects to a thermal imaging device via Wi-Fi.

Among the functions already known from the devices of this series, let me remind you of the 4.5-18x digital zoom, which operates both discretely and smoothly. There is also a stadiametric rangefinder, picture-in-picture function. As with many other Pulsar models, an image is displayed in eight different colour palettes.

IPX7 device protection allows to withstand immersion in water at a depth of 1 m for up to 30 minutes. Temperature range: -25 to +50 С.

Animal details are noticeable and the environment is well-detailed, with bushes and tree edges visible in the background.

In my opinion, Pulsar has done a good job on upgrading the Helion 2 XQ series device. A very thorough and systematic approach is evident.