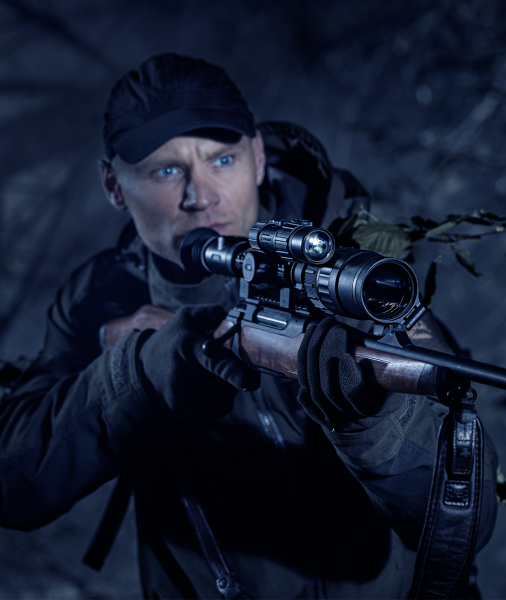 The Digex C50 is the first Pulsar riflescope with a colour sensor. Colour sensors in digital riflescopes are not novelty and the range of such riflescopes is increasing.

Today there are at least five models on the market, not counting duplicates, which show colour images during the day. The innovation is that Digex C50 shows images in colour from dawn to dusk.

The new riflescope will inevitably be compared with the previous Digex models N450 and N455. The riflescopes are similar in appearance and name, but they are different devices in terms of characteristics and methods of use.

The resolution of the Digex C50 colour sensor is 1928x1088 pixels versus 1280x720 pixels in the black and white Digex N455. The displays in both riflescopes are identical – AMOLED with an effective resolution of 1024x768 pixels.

Magnification is similar in the two: 3.5x–14x in the Digex C50 versus 4–16x in the Digex N455. The Digex C50 has better digital zoom due to the higher sensor resolution. Zoom plays a role in determining the trophy parameters of the animal and is important if you need to take a long-range shot. 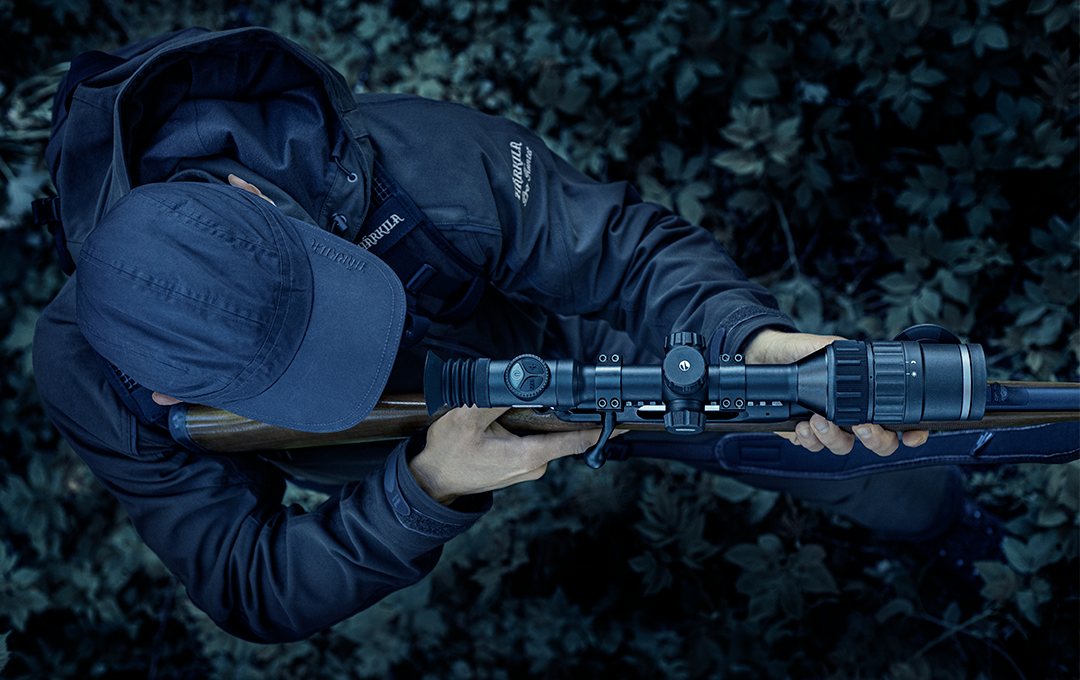 During the day, the Digex C50 shows true-to-life colour images in cloudy and clear weather until sunset. On plain field and forest game hunts, except for drive hunting, the Digex C50 seamlessly replaces daytime optics. The riflescope's magnification range and good detail in zoom resolve the task of target identification and shooting at above average distances of several hundred meters. Notably, the Digex C50 can be switched to black-and-white mode during the day, but it's hard to imagine what would justify this need. In day mode, the riflescope works until sunset.

At sunset, as illumination decreases by the minute, the riflescope lens should be switched to a higher light transmission mode. To do this, change the ring on the lens from the Day to the Night position. The visible image becomes noticeably brighter and clearer, retaining colour until deep twilight. This extends hunting time in mid-latitude climates by 45-60 minutes. The ability to see in colour when it is difficult to discern anything with the naked eye is impressive.

Before becoming acquainted with the Digex C50, I perceived image colour at twilight more from an aesthetic standpoint. At night and at dusk, the existing night devices produce a monochrome image that is perceived as an invariable standard. The Digex C50 shows that a colour image is much more informative than a monochrome one. It is much easier to find a red-brown deer or red fox against the background of grass, bushes, trees and even in some depths of the forest using the colour differences between the object and the background, rather than looking for them by contours and shades in a monochrome image.

At nightfall, we switch the riflescope to night mode. Now we don’t touch the lens, but instead press the ON button. The sensor starts recording radiation in the infrared range, the riflescope sensitivity increases sharply, the image becomes black and white.

Let's return to comparing the Digex C50 with the Digex N455. The efficiency of the colour sensor at night is considered lower than the monochrome one. Before the Digex C50, this opinion was confirmed in practice. Devices with colour sensors made a good first impression on hunters, but disappointed new owners on the very first night hunting.

In terms of night sensitivity, the Digex C50 is not inferior to the now former leader, Digex N455, and surpasses it in overall image quality. The reason for this is not only the sensor resolution, but also the algorithms for image processing in different lighting conditions, including when operating with infrared illuminators.

At night, especially when there is no moon, you need an infrared illuminator for hunting on a living landscape. As an accessory, the new Digex got the new Pulsar Digex-X850S (850 nm) and X940S (940 nm) LED IR illuminators. In relation to previous models, these illuminators are distinguished by an almost threefold increase in optical power. The power is adjustable in a tenfold range of 80 to 800 mW for the Pulsar Digex-X850S and 70 to 700 mW for the Pulsar Digex-X940S. The illuminator is mounted on the riflescope body with a ring clip. It is completed with an APS2 battery with a 2 Ah capacity, as well as an adapter cover for installing an optional APS3 battery (3.2 Ah).

Using IR illuminators with night riflescopes is a separate skill. The light reflected from the grass when viewed from the ground or branches if the hunter is sitting in a hunting blind, can reduce image quality. This issue is solved by focusable illuminators, which reduce the light flux into a narrow beam. However, the downside of this solution is a small area of illumination, when most of the field of view remains dark.

The optics of Digex IR illuminators are designed so that the entire observation scene is illuminated. The Digex C50 works well for situations with illumination from close objects at the edge of the field of view. The riflescope reduces its level and at the same time clearly displays “useful” objects that are at a distance. As a result, the hunter can see the entire riflescope’s field of view.

In terms of a set of program functions, controls and ergonomics, the Digex C50 is similar to its predecessor model. The functional list available with Pulsar night optics has been described in detail for a long time. Here we will focus on just a few points.

The Digex C50 operates on two rechargeable batteries, an internal one with a capacity of 4.9 Ah and a replaceable battery with a capacity of 2 Ah or 3.2 Ah (the latter is available as an accessory). A similar approach to power supply is used in the Digex N455. There is one difference – the internal battery capacity in the Digex C50 is 1.5 times higher. A full charge of the batteries lasts for 8-10 hours of operation. The riflescope can also operate from an external power bank, which is connected via USB-C and not only powers the riflescope, but also charges the internal batteries.

The image from the riflescope is recorded or photographed on the built-in recorder. The “picture-to-picture” function calls up the high-precision aiming window on the display, in which the hunter sees the image of the target with magnification and the aiming reticle. As a result, the hunter can simultaneously view a detailed image in the aiming area and see the full field of view. Zeroing settings are saved in shooting profiles. Each of the five profiles contains up to 10 zeroing points.

The riflescope is compatible with the Pulsar BT Bluetooth remote control, which is placed on the weapon in the required place for the hunter and duplicates the operation of the button controls and encoder.

The Digex С50 claims to be the No. 1 riflescope in the digital riflescope class. There are many other coloured digital riflescopes on the market, but there is hardly another fully-featured day/night riflescope. Built-in video recording, changeable reticles and shooting profiles, “picture-in-picture” functionality, resolution for confident trophy identification, coloured images in deep twilight... the Digex C50 offers a new kind of day hunting experience, but at the same time retains high-performance night optics. This is the case when the riflescope does not need to be removed and you don’t want to take it off the weapon.